The new Global Vascular Guideline (GVG) on chronic limb-threatening ischemia (CLTI) has just been released hot on the heels of the new IWGDF guideline chapter on peripheral artery disease (PAD).

In case you were wondering CLTI is a severe form of PAD. However, it is subtly different to, builds on and will replace the terms- severe PAD and critical limb ischaemia.

GVG defines CLTI as “a clinical syndrome defined by the presence of peripheral artery disease (PAD) in combination with rest pain, gangrene, or lower limb ulceration of >2 weeks duration.”

In short, it is severe PAD that by itself or in combination with ulcers or infection seriously puts the limb at risk of major amputation (and/or delayed ulcer healing). The authors estimate that CLTI makes up about 10% of all PAD cases.

How are the CLTI & PAD guidelines different?

Are there any similarities between these guidelines?

Yes. They have some of the same authors, methodologies and recommendations. Both were authored by some of the same key global PAD experts – including Prof Joe Mills, Prof Rob Hinchliffe and our very own Prof Rob Fitridge. Both were overseen and authored by an expert working group, both were based on at least 3 extensive systematic reviews of the PAD literature and both used the gold standard GRADE guidelines methodology.

And perhaps because of this, in general both contain similar recommendations, but with the GVG CLTI recommendations being much more detailed. In terms of specific recommendations that are the same though, perhaps the most important of these is they both strongly recommend clinicians to “use the WIfI (Wound/ Ischaemia/ foot Infection) classification system to guide clinical management in all patients with suspected CLTI (PAD).”

So, with both of these global PAD guidelines recommending the use of WIfi, then it would probably be a good idea when referring to a Vascular specialist to include the patient’s WIfI grade in your referral so that you are both speaking the same language; which we know many services are already doing.

What’s interesting in the CLTI guidelines?

Heaps! Apart from WIfI, it also includes multiple clinical pathways to help your diagnosis and treatment considerations for people with PAD as per the example below.

So, if you really want to speak “vascular” then throw in a few “what’s their WIfI like”, “have you properly planned with PLAN”, and “are you using the new cutting-edge GLASS system to find your preferred TAP” into the next conversation with your friendly vascular surgeon and see what happens ????. 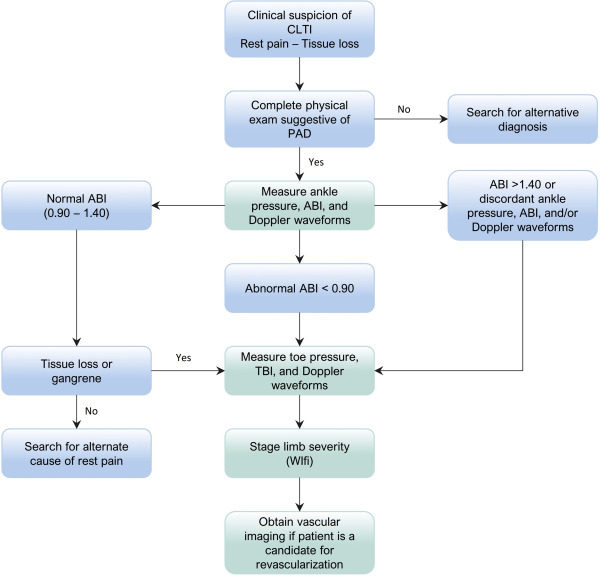 Do I need to read the GVG CLTI?

If you are a vascular surgeon or other vascular specialist, then definitely yes! This should become your ‘PAD bible’ as it’s been endorsed by pretty much every national, regional or global vascular surgical society under the sun, including the Australian and New Zealand Society for Vascular Surgery (and the American Podiatric Medical Association).

If you are a not a vascular specialist, but you work with patients with diabetic foot disease or vascular specialists then it would be very, very handy to at least read through the recommendations. This will help you understand the WIfI, PLAN and GLASS systems and in turn what evidence-based tests you should be using to diagnose CLTI, plus, what assessments and treatments your patient should be receiving when you refer to your local vascular surgeon with CLTI.

However, we would recommend you read the IWGDF PAD guideline first to get a good PAD understanding, before turning your attention to reading through the GVG CLTI guideline right here.

But, what do I really need to know?

If you want to know exactly what you need to know or if all that has bamboozled you, then get to DFA 2019 where Prof Rob Fitridge will guide you through all you need to know from these two new global PAD guidelines in his keynote lecture and workshops in Brisbane 8-10 September!